Saudi is the largest country in the Middle East, and fourth most populous in the MENA region with its 2020 population estimated at approximately 35 million people.

80 % of Saudis live in ten major urban centers – Riyadh, Jeddah, Makkah, Medina, Hofuf, Taif, Khobar, Yanbu, Dhahran, Dammam. The country is also home to a large community of expatriate residents, including those from Western markets, India and Asia who live in the cities of Riyadh, Jeddah, Yanbu and Dhahran.

In September 2019, Saudi Arabia opened its doors to leisure tourists from around the world. This historic milestone is a key step in the implementation of Vision 2030, the Kingdom’s economic diversification program, aiming to connect Saudi to the world, build bridges between cultures and create prosperity for the future. 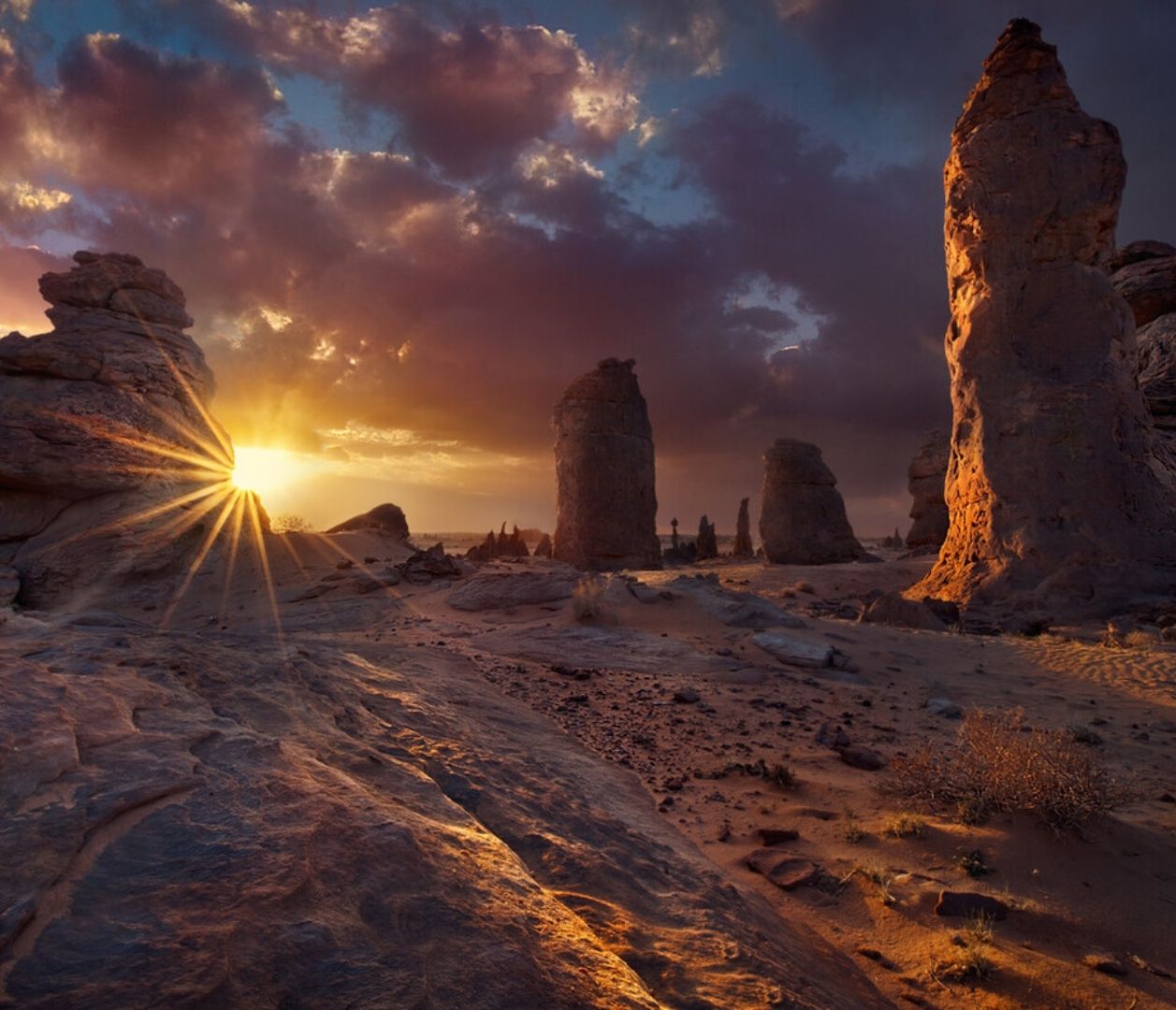 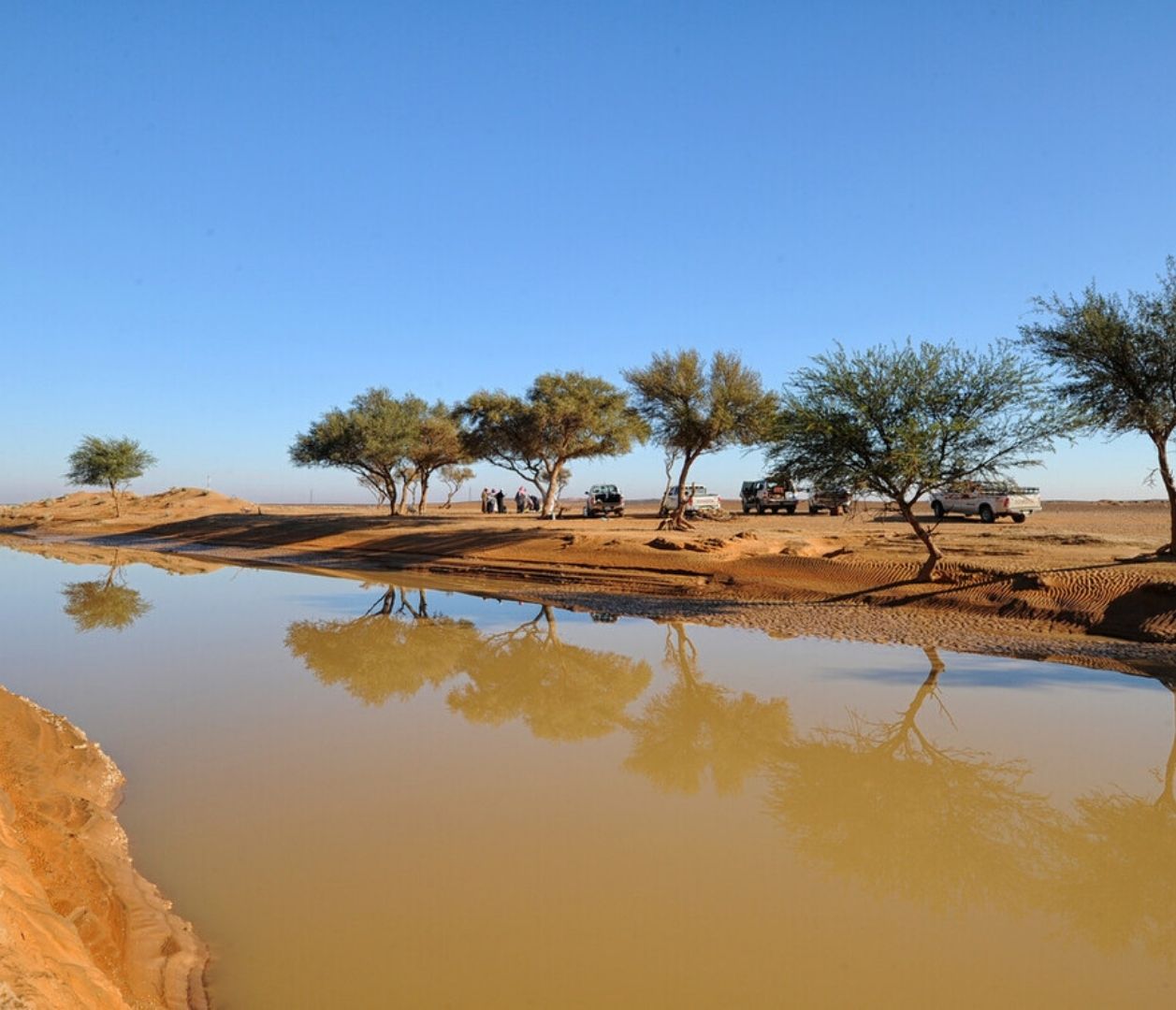 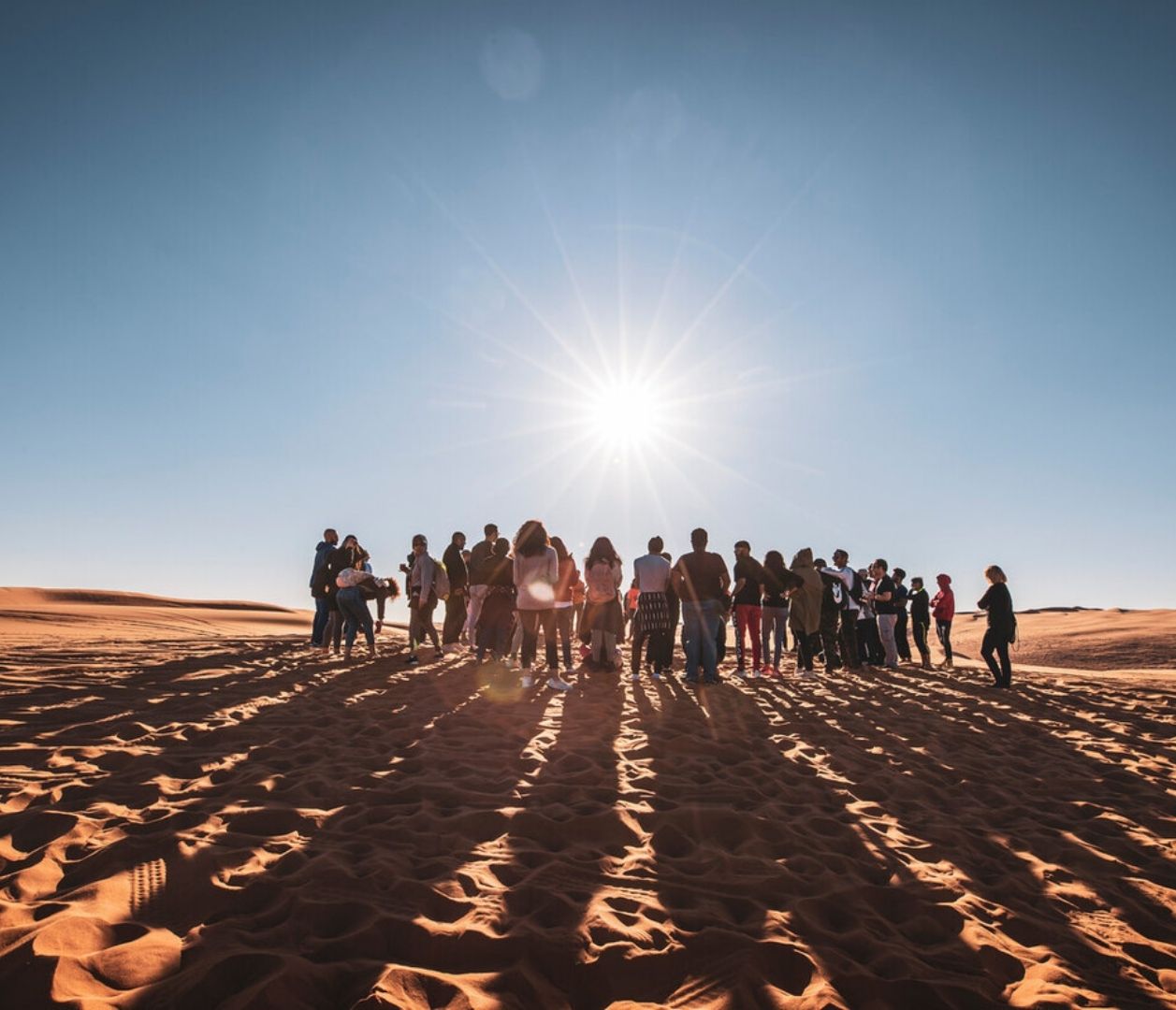 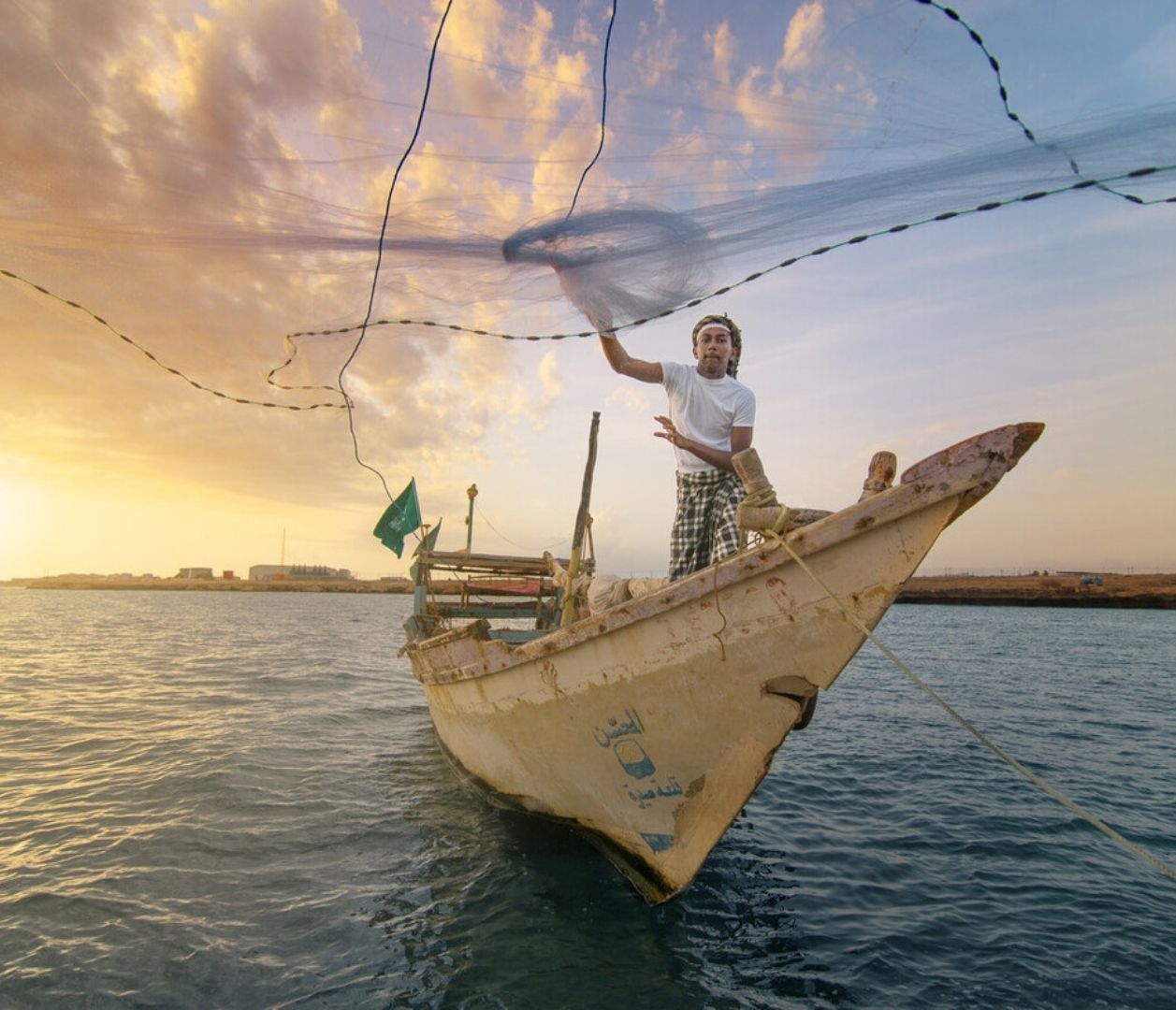 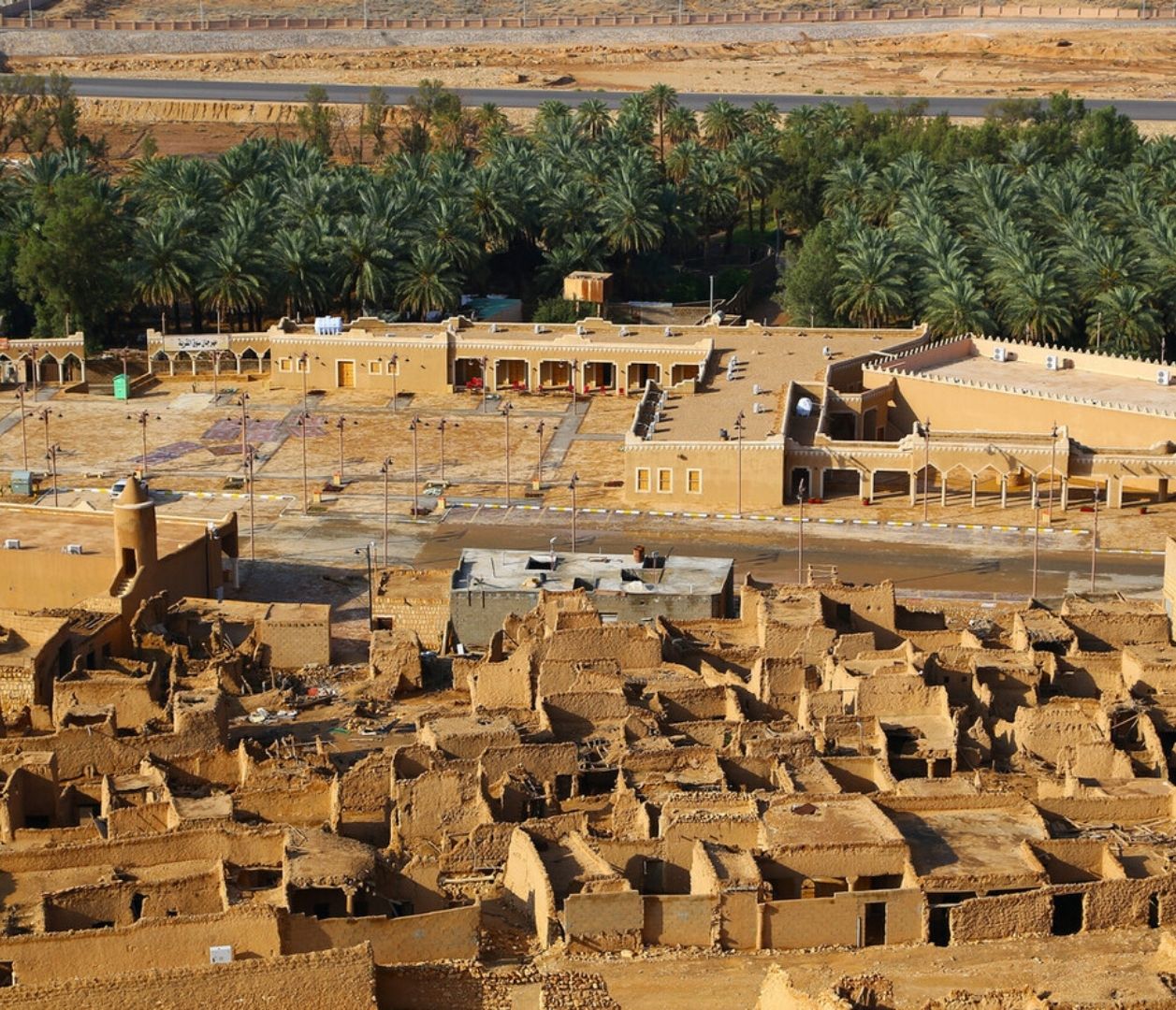 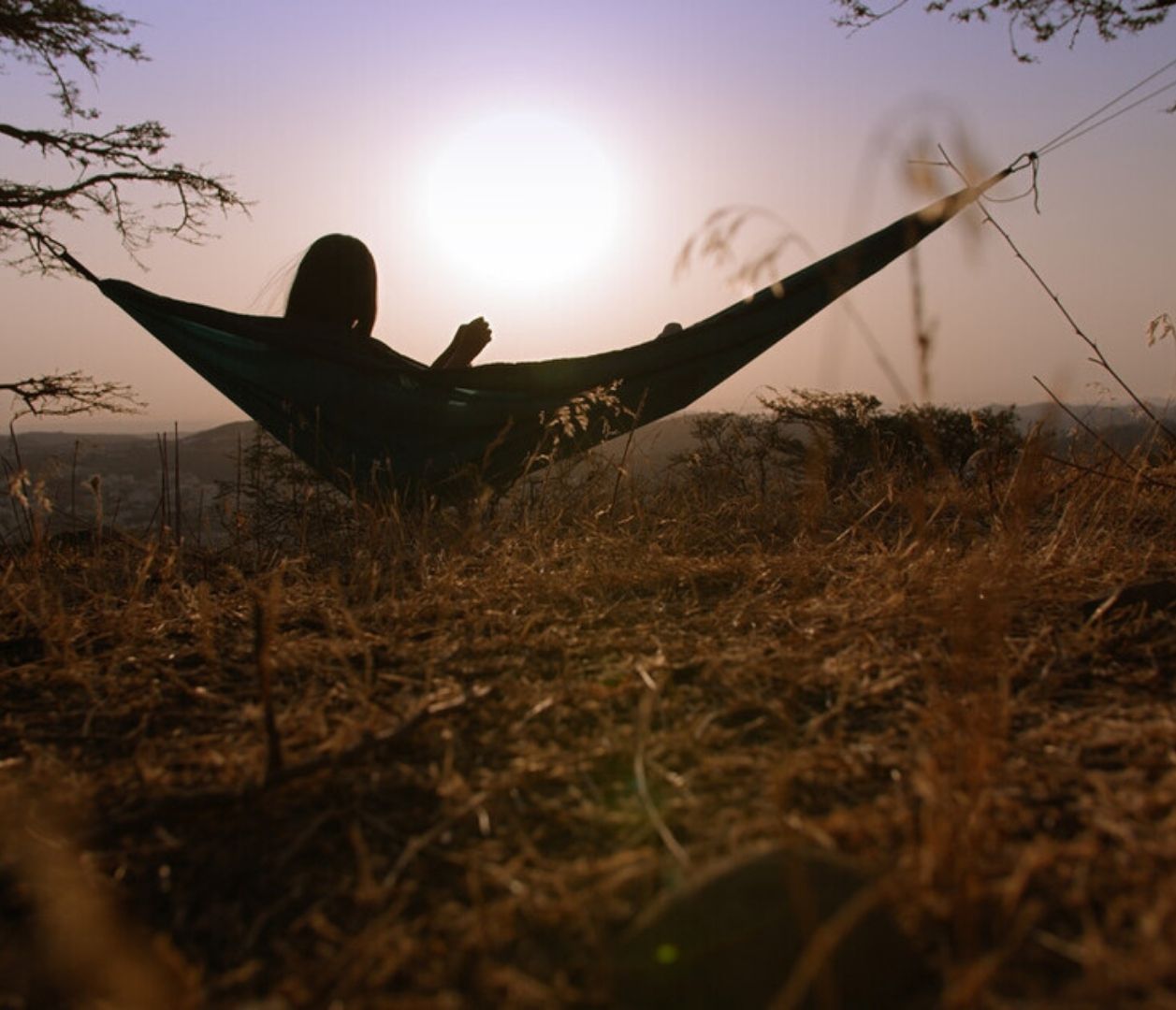 Saudi offers awe-inspiring natural phenomena and exciting, unique ways to explore its diverse terrain, making the kingdom worthy of a spot on any outdoor enthusiast’s bucket list. The kingdom boasts quite an itinerary, from desert and water adventures to camping and hiking through caves and craters. 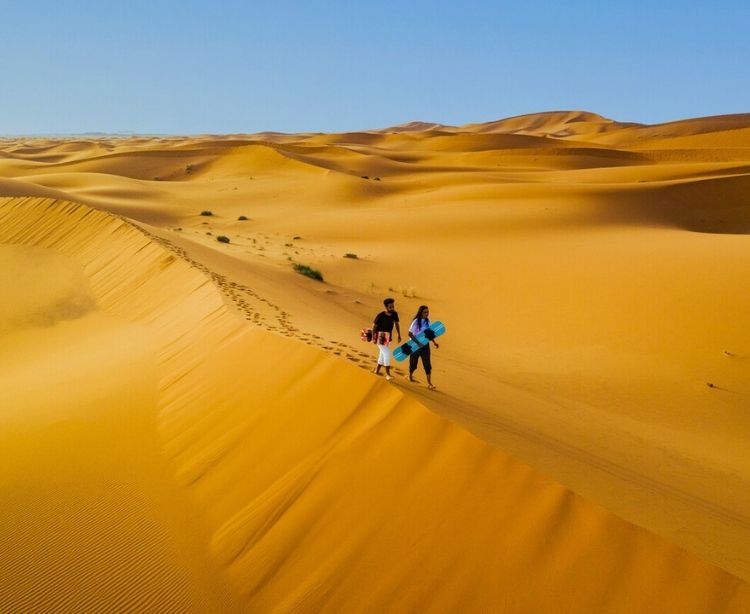 Part of what’s special about the Arabian Peninsula — and specifically Saudi — is its desert. In fact, Saudi Arabia is home to the largest sand desert on earth. From adrenalinepacked excursions like dune bashing and sandboarding to more serene, history-inspired activities such as camel riding and Arabian camping, the desert in Saudi serves as a canvas for more than just adventure travelers. 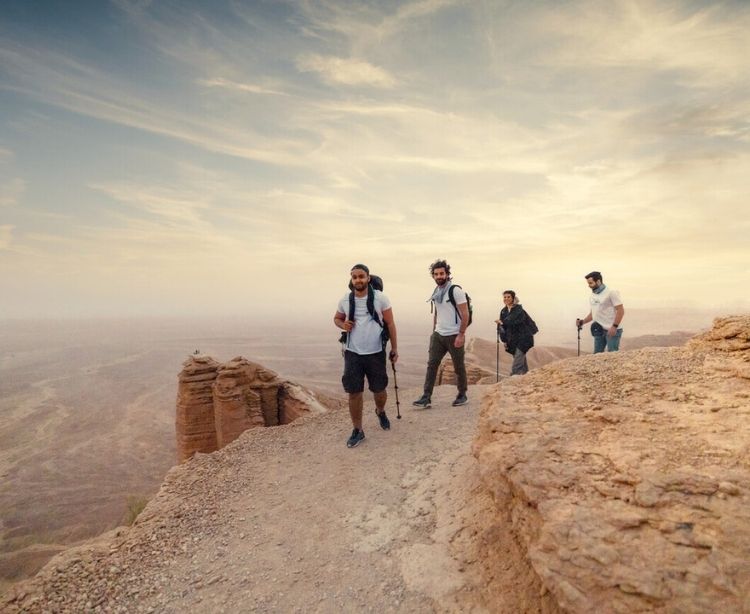 Saudi’s diverse topography is a delight for hiking enthusiasts. With striking lookout points atop cliffs and an oasis in the desert, there are plenty of adventures to embark upon on foot. 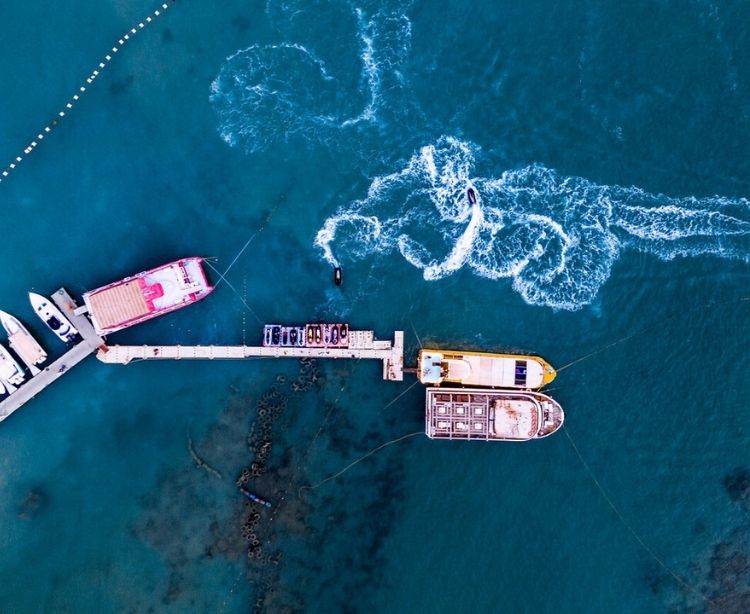 Saudi is bordered by the Red Sea to the west and the Arabian Gulf to the east — making an adventure on or in the water an ideal way to explore. 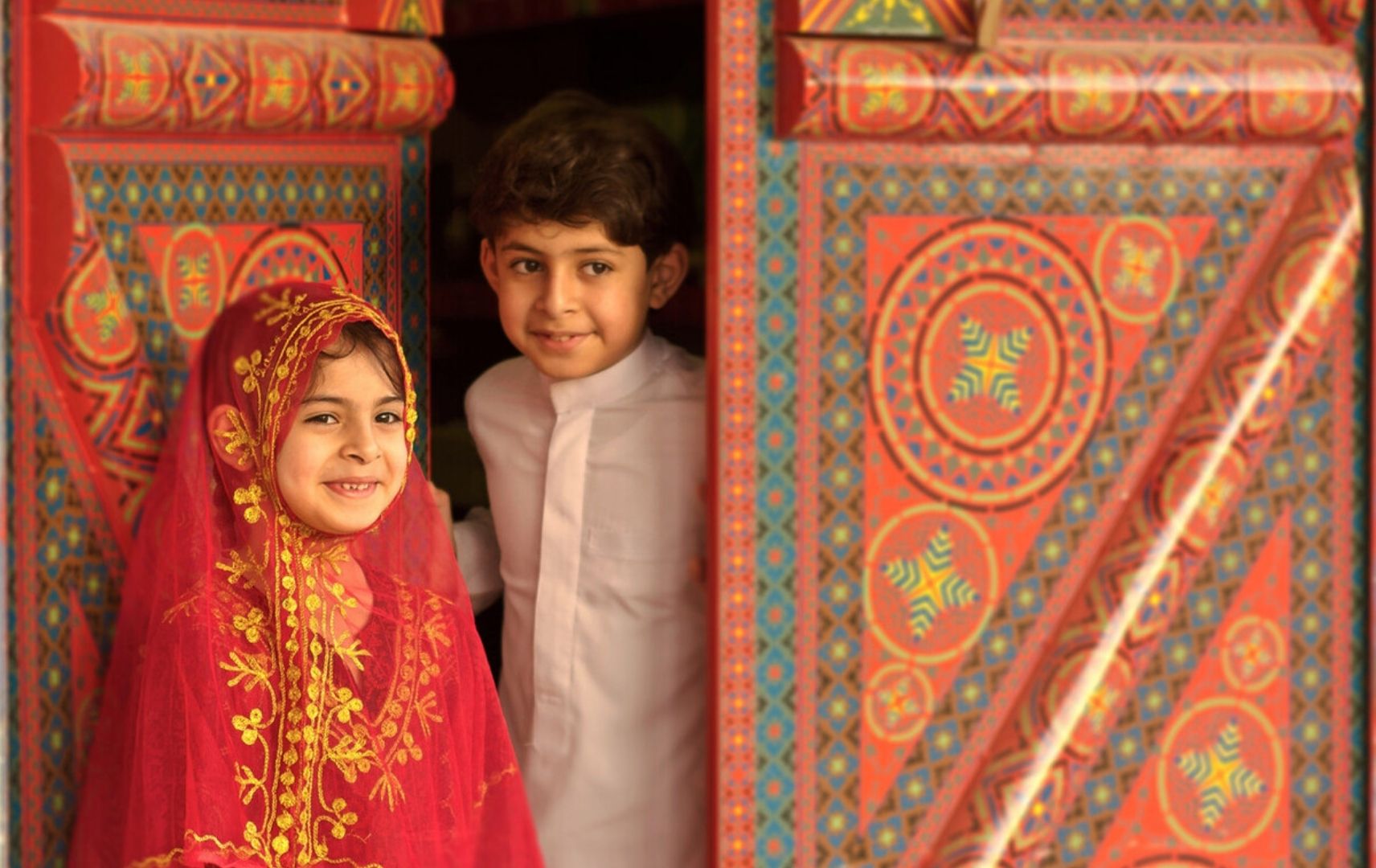 Saudi culture is as rich as it is diverse. Visit the Kingdom’s many mosques and traditional markets to experience a rhythm of life that has little changed over the centuries. Explore the different regions to experience the multicultural variety of foods, lifestyles and customs. And, for a taste of modern Saudi, don’t miss the urban districts and entertainment centers where people meet to shop, dine or just spend time with friends. From traditional dances and handicrafts to gleaming skyscrapers and thriving cities, Saudi is a destination in which history and modernity are inextricably linked and endlessly beguiling. 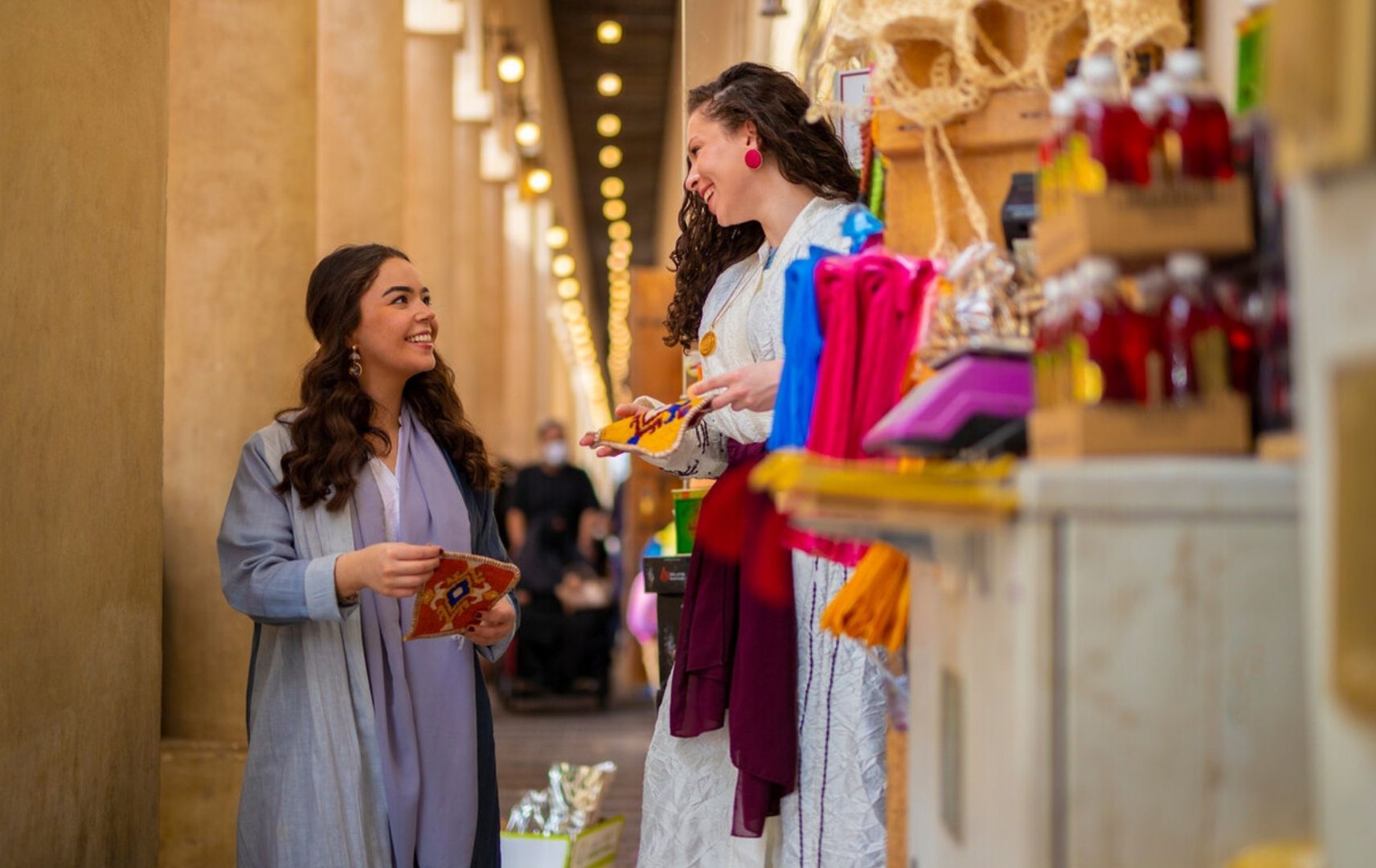 From old-world souqs to modern malls to boutique concept stores, Saudi has a wealth of shopping options, offering everything from traditional wares to designer items to creative collections and offbeat décor. 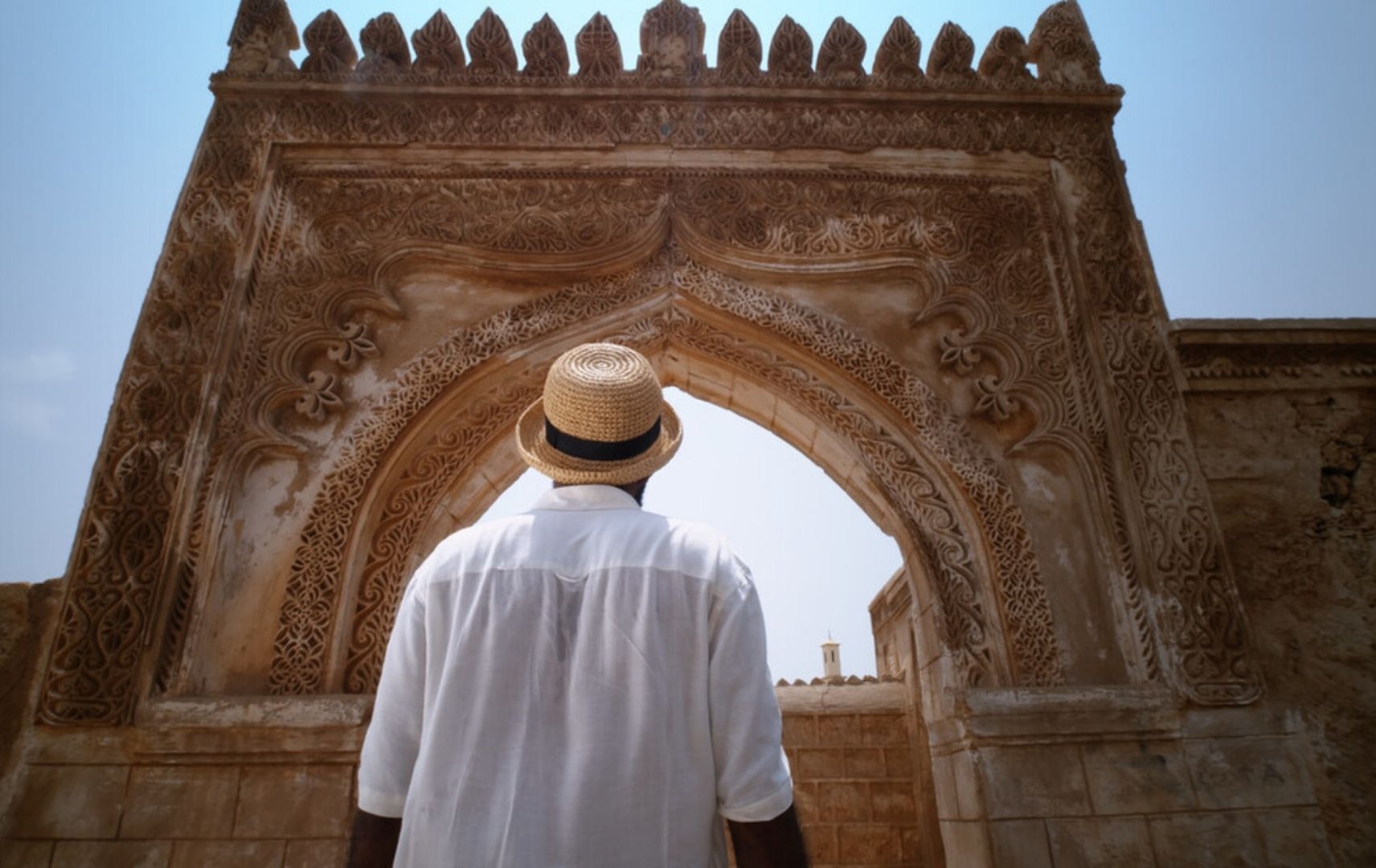 With such a rich history, it’s no surprise that Saudi is home to a plethora of museums, castles and cultural institutions around the country. Visitors can immerse themselves in exhibitions and displays that not only highlight the ancient past but also bring to light more contemporary works by local and international artists. 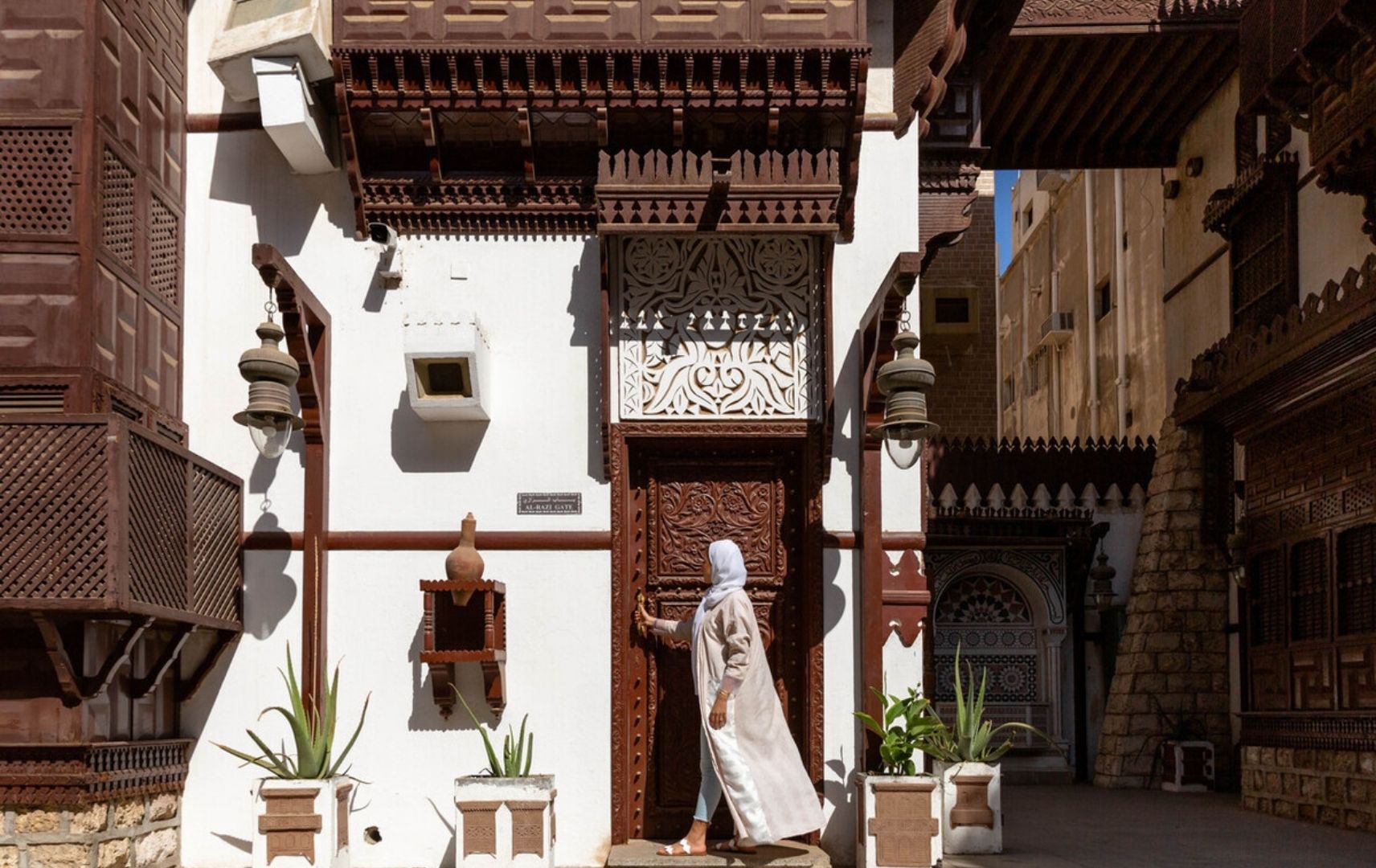 Experience a land where the past comes to life. From the labyrinthine streets of ancient cities, to the intricate rock carvings of early civilizations, the kingdom’s rich history is written large across the landscape. When you explore the ancient ruins and rock-carven tombs of Nabatean Hegra or walk the narrow winding streets of Al-Turaif, surrounded by beautiful Najd architecture, you are opening a doorway into Saudi’s rich and fascinating history. Since the days of antiquity, Saudi has occupied a pivotal position at the crossroads of Asia, Africa and Europe. Today, there are more than 11,000 archaeological sites throughout the Kingdom, telling the story of the civilizations that lived over the years. Saudi is proud to have six UNESCO World Heritage Sites.

Whether you are sailing the crystalline waters of the Saudi Red Sea, exploring one the country’s many national parks or hiking through the green hills of Al Baha, Saudi will surprise and delight you with a wealth of natural treasures.

From seas teeming with exotic fish, rare marine animals and thriving corals to lush oases, verdant farmlands and even desert areas that are rich with life and raw natural beauty, Saudi is a kaleidoscope of unique natural experiences. 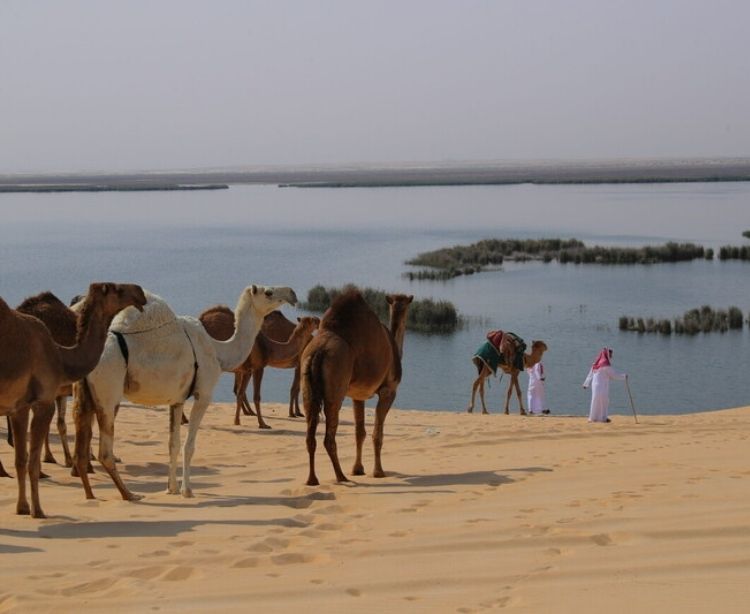 Saudi is made up of a predominantly desert landscape, with desert tourism possible over three seasons of the year and varying from region to region. The desert experience is the perfect starting place to discover the culture, customs and nomadic way of life. 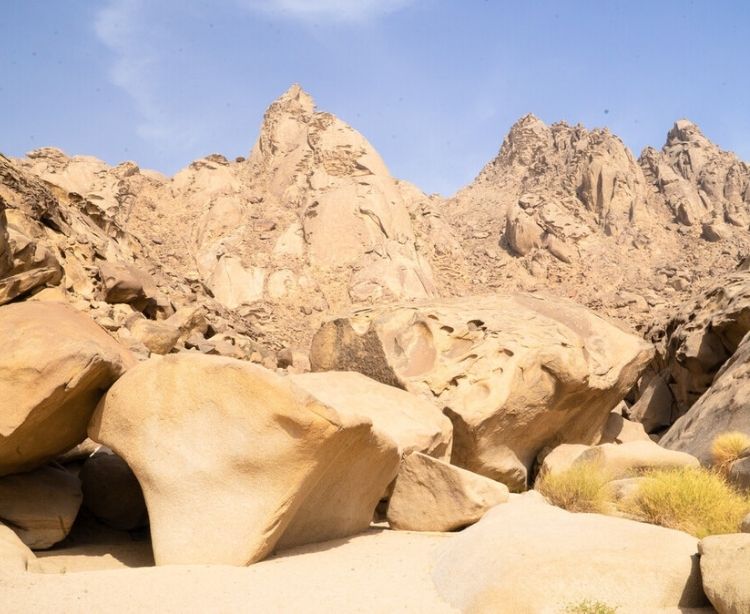 Saudi has no shortage of mountainous landscapes and breathtaking views. From the highland region of Asir, known for its abundance of heritage sites and outdoor thrills to the north-western city of Tabuk, perfect for travelers looking for old ruins to inspect and new places to explore, there is something for everyone. 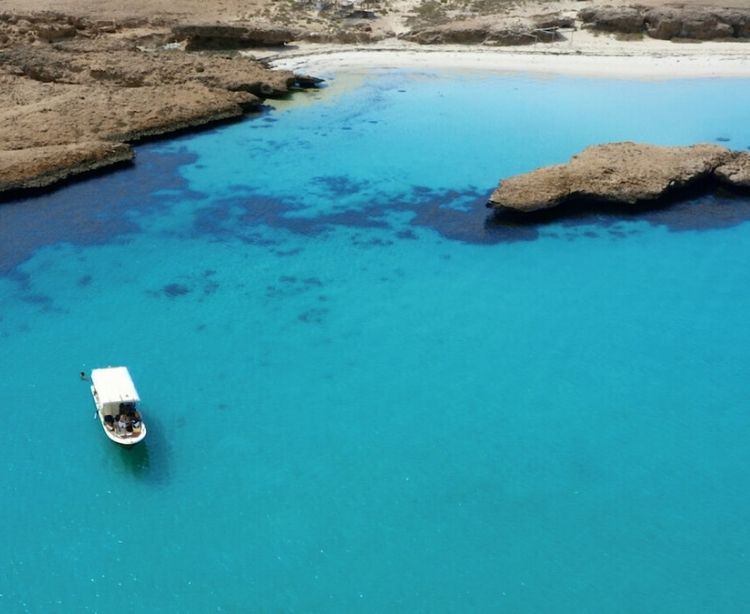 With a coastline stretching more than 2,000 kilometres, Saudi offers some of the world’s most stunning stretches of golden sand and tranquil blue waters, mostly untouched coastline and rich nature and marine habitats, perfect for swimming, diving and water sport activities.

Before we recommend any destined to our customers we always want to experience it ourselves. In January 2022 a group of Lufthansa City Center Travel advisors joined a trip to Saudi to explore the country and find the most stunning viewpoints, most renowned restaurant and breath-taking nature sites,

My trip to Saudi after 10 years